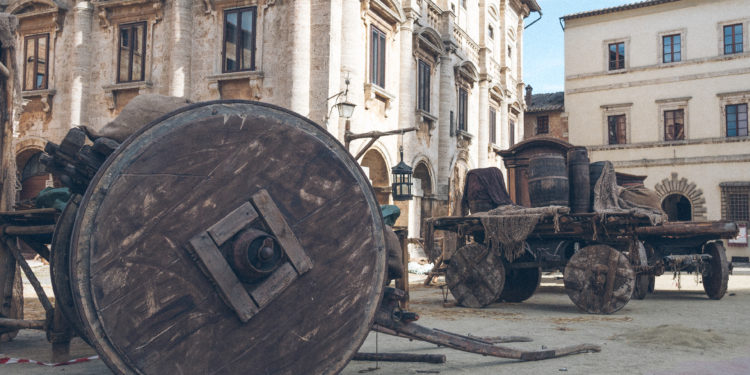 Montepulciano is a true Tuscan hill town – small, high up on a high limestone ridge, with steep streets, Medieval and Renaissance layout and architecture, and remarkable vistas over vineyards and olive groves.  The town is famous for its local wine, the Vino Nobile.  Those in the know also seek out the town’s pici pasta, and its pecorino, honey, and lentils.

Founded by Etruscans, Montepulciano became a garrison town protecting major crossroads during the Roman Empire. Hundreds of years later, as an ally of Florence and foe of Siena during the Renaissance, Montepulciano became wealthy and semi-autonomous.  At that time, major Florentine architects designed the town’s essential architecture and public spaces.  However, once Siena was captured by Florence, Montepulciano’s importance to Florence waned, and its wealth and significance declined.  From the 19th century onwards, nearby Chiusi, which was outfitted with train lines, became an industrial town, while the Montepulciano area remained an important agricultural area.

We arrived in Montepulciano on a rainy morning in early May.  The town is stunning at a distance, and the roads into the town itself are vertiginous and breathtakingly beautiful.

We walked the streets, which all lead up to the noble Piazza Grande.  Originally small and medieval, in the Renaissance the piazza was re-configured as an airier square,  flanked with noteworthy architecture.  The Palazzo Comunale, still the town hall, was built in the 14th century, then reworked by Michelozzo in the 15th century.  Based in Florence, Michelozzo was the architect of the Palazzo Medici, and of San Marco, and a re-worked Palazzo Vecchio in Florence.

The Cathedral  was redesigned in the late 1500’s, its exterior left unfinished; its adjoining campanile dates from the late 14oo’s.

Though rain prevented us from doing so, climbing the tower of the Town Hall reportedly rewards with superb views. We did find this vista of the agricultural valley from the back porch of the Palazzo Comunale. 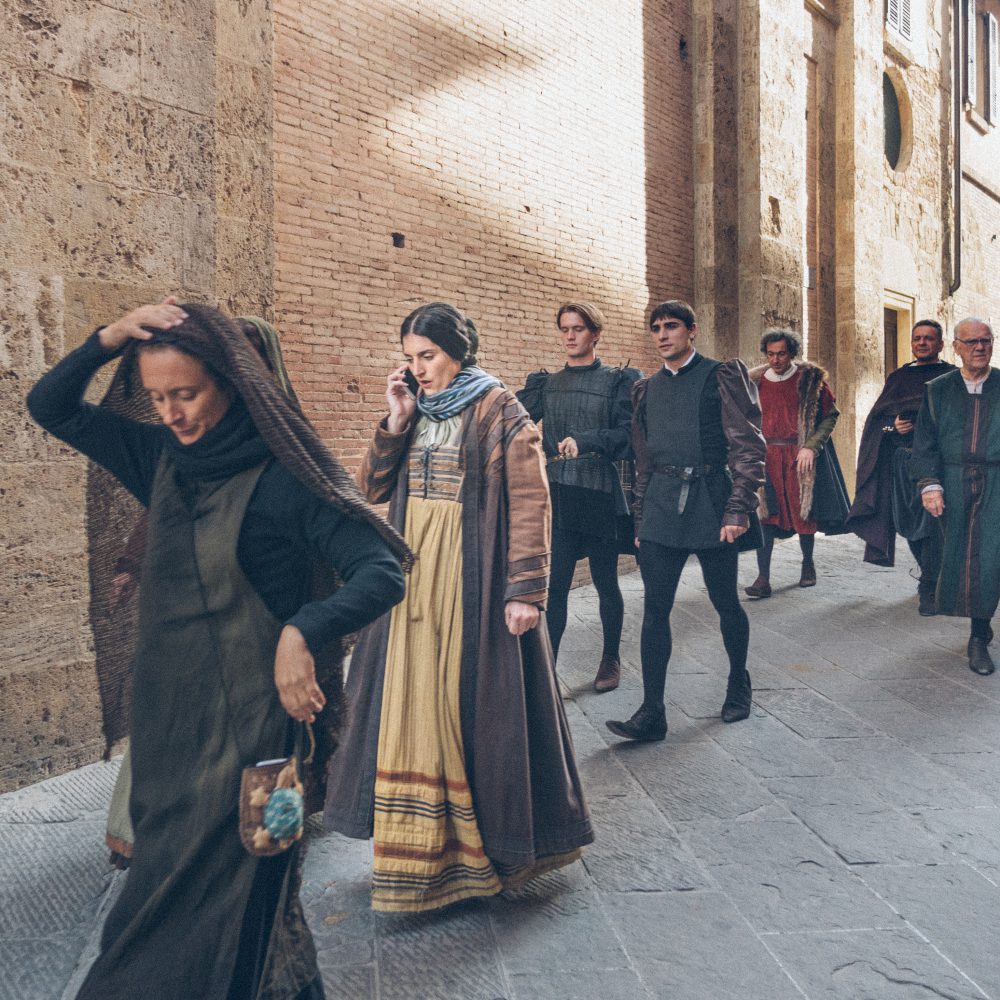 At the base of the walled town, we visited the Sanctuary of the Madonna di San Biagio, Sangallo the Elder’s masterpiece, and architectural symbol of Montepulciano.   As with a few other churches of its time, the building was sited just outside of town, so as to be best appreciated from all angles, and on its own.  The pilgrimage church has a perfectly proportioned dome, and is a highly refined expression of the High-Renaissance Greek Cross plan.  Only one of the proposed twin campanile towers was ultimately built.  Inside, the church holds a surprise:  If a visitor stands just under the dome and makes a sound, a remarkable repeating echo resounds in the space.  San Biagio is currently being restored, but its re-opening is scheduled for summer of 2014.

Sangallo also planned supporting buildings for San Biagio, one of which is now occupied by Ristorante La Grotta.   We stopped for an excellent lunch, with wonderful wines.

The Wine Cellars of the Palazzo Ricci

After lunch we re-entered and explored the walled town, then arrived mid-afternoon at the Palazzo Ricci for a scheduled wine and cheese tasting.  The Palazzo is very short walk from the Piazza Grande. 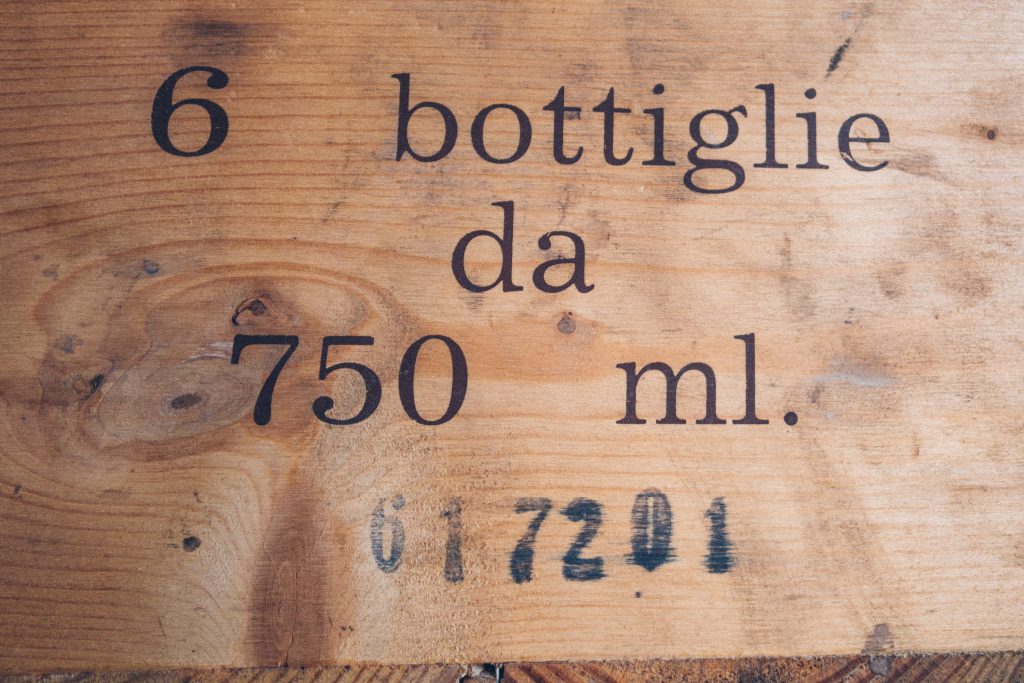 The Ricci’s were a powerful local family, one member of whom became a cardinal.   The cardinal commissioned the building of the Palazzo in the early 16th century.   This impressive building now holds two treasures: a summer music conservatory that attracts students from all over Europe, and an extraordinary wine cellar.  The cellars descend three cavernous levels, the ceilings held up by massive arches, pillars, and vaulting carved out of soft stone.  These dark cool rooms with their high ceilings have no small resemblance to historic churches and cathedrals of the area.  In these shadowy depths rest the fruits of the nearby sunny hillsides:  huge barrels hold local Vino Nobile.   The pilgrimage through the cellars lead to the wine tasting rooms, where we tasted superb wine, with local cheeses.  The host was charming and knowledgeable.

This is why we love the slow living in Montepulciano

Tips: Park at ULTIMO PARCHEGGIO (in english LAST PARKING) of Piazza Grande (monumental area ) you will drive the car on top of the hill even it seems forbidden – but go!!

If you park at the first parking you will have to walk 20 minutes in the hill to reach the most spectacular area that is piazza grande. You can pay the parking (blu lines with coins and sometimes also with credit card in Montepulciano).
To Shop:
TagsBest Montepulciano winebest restaurant Montepulcianomaledetti toscanipiazza grandeRameria MezzettiSlow Living in Montepulciano
Share:
Previous Article